Cultivating A love For The Classics - Terry Camp 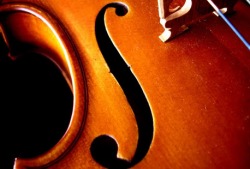 I knew that my children might not "take" to the classics like a duck to water, so I decided from the beginning to cultivate their tastes at a slow and steady pace. I recently read that a child must taste an unpleasant food fifteen times before it becomes pleasant to his palate. I question this a little because I know I have tasted at least fifteen peas, and I still do not like the little green things.

However, I do love broccoli, and I hated it as a child. The mere mention of broccoli would bring me to the point of gagging. All it took was for me to try broccoli covered with cheese. Then, after I found myself enjoying that, I smothered it with butter. Now, all it takes is a little salt.

All this food talk is to say that an appreciation of the classics is an acquired taste. We may have to begin with an appetizer like taking our kids to a ballet such as The Nutcracker Suite. Next, we may move on to a meatier course like the art museum. We may detest the paintings of Picasso, but when we study the works of Michelangelo or Raphael, we may find ourselves staring at Picassos. Or we may find that we still detest Picassos.

When I first began reading the King James Version of the Bible, I stumbled over the thees and thous and all the words that ended with eth, but after a time, the words become a part of me. I began to love the Word of God in a way that was not possible with another version.

Have you ever read a Doctor Suess book to your children? Whenever I do, I go around talking in rhyme. "Tonight we’re having spaghetti! Do you think that you can get ready? You’ll need to use a plate. Hurry! Hurry! Or you might be late! And don’t forget the fork, or tomorrow you’ll be eating pork." What you read begins to become a part of who you are.

Our family adventure into the world of the classics had begun! If my children were going to develop a passion for the classics, I decided I must be passionate about them. I perused my books on the shelf and looked for a good classic to curl up with on the couch. Many people on the Charlotte Mason loop had talked about reading Jane Eyre. I saw the book on my shelf, but I knew nothing about it.

I picked up the book and examined the binding and the worn-looking pages. I guess someone must have liked the book if it’s been around this long, I thought. I opened it and began reading about the author Charlotte Bronte, who wrote the book in 1848. I began to think perhaps I had made a mistake choosing this as my first road on my new adventure, but as I read the first few pages, I began to feel myself being transported into her life. I began to read in an English accent. I realized I had been missing out by not having read the book before. With each page that I turned I was further indebted to Charlotte Bronte and to Charlotte Mason for showing me a new richness to life that I had not known before.

I desperately wanted my children to be able to experience the same feelings I was having while reading this great book. My first thought was to begin reading it aloud to them. I decided against that idea because the themes in the book were a little too "grown-up."
One night I tried an experiment with my children. I got out my wonderful book called Children’s Book of Verse, a collection of poems by various authors. (I would like to add that I would not put this book into the hands of my children as it does have many poems that are against some of our beliefs. I will, however, select poems myself to read to them.) The kids were all wound up, bouncing off the walls, and crawling all around the room. I told the children (to get their reaction) that I was going to read them some poetry. "Oh, Mom, do you have to?"

The first poem I selected was a poem about a hippopotamus. It was aptly called "The Hippopotamus" by Jack Prelutsky. They loved it. They were fairly attentive as I read through the poem, but they were still wound up.

I read another poem, at their request. My children all love animals, so I chose another poem about animals. This one was called, "The Tiger" by William Blake. This time the poem was profound. I asked them to explain the poem to me. They said, "Read it again." I read the poem and asked the question again. Again they said, "Read it one more time." This time, they were able to answer the question the author was asking in the poem.

I closed the book and said, "Time for bed."

They responded with, "Oh, Mom, can’t you read one more?" (You may be thinking that my children were just practicing the fine art of "bedtime-stalling-tactics," but at this moment I could tell that they honestly desired to hear more poetry.)

This time I chose a poem that was definitely a quiet-down poem. I told them they had to be very quiet while I read. The poem I chose was called, "Bedtime" by Thomas Hood. It was a marvelous poem. I read the poem gradually, making my voice softer and softer. When I got to the last line, "It’s Time for Little Children to Go to Bed," I was speaking just barely over a whisper. When I looked up from the book, all the children were content and quiet.

If anyone had walked into my home at that moment they would not have believed eight children were sitting in the living room. You could barely hear more than their breathing. In a few short minutes, reading poetry had turned my bouncy, wound-up kids into quiet and calm children who were prepared to go to bed.

The first time I told Ashley I wanted her to read a classic, she looked at me with a sideways look as if to say, "Are you crazy?" Of course, she would never really say that, but she does on occasion think it. Now when she asks me what the book is about and I respond with"It’s a classic!" - she no longer looks at me sideways, but looks at me thankfully - sometimes.